Some posts ago I discussed regarding an urgent need to review thru an international summit, some particular aspects of the so called'revealed' religions. The emphasis was especially made re the intolerant side of these religions (Islam, Judaism, Christianism). In substance these faiths-religions consider false any beliefs which are different from their own and more... This aspect (and other) of these religions is dangerous, malignant and can lead to violent and extreme interpretations, cause starts a series of wrong interpretations of 'spiritual messages'. As we see these days with the extremist ISIS group, regarding the tragic facts involving American journalists and more. As I said at the time, I belief that a planetary congress of All the religions is needed. A summit that will be held to rectify 'wrong interpretations' of these religions, once for all. So that ALL the people that are maybe using, in good or bad faith, any words from sacred books, for obscure goals that are not pertinent with PACIFIC, spiritual life in this modern world, will be banished. I assume that all the priests, monks, rabbah, imam, they will teach (will be forced!) the right actions then. Who won't do it, will be removed from being a 'spiritual' guide. I believe this being a right step in the right direction, at the least. Otherwise, in this chaotic scenario, ignorance, violence and confusion will keep proliferate together with criminal actions...nothing can stop ignorance, like a mental disease!

At least Neopaganism, as intended in his high meaning, is totally tolerant of any faith, cult and religion.Consequently we DON'T want to live in a world of violence cause of a crazy misuses of any religious ideas or other perverted thought.

For me, there is no Holy war, if not the 'war' that we need to fight with ourself to become better human beings.

This review, or the Summit is NOW urgently needed!

Yes, you said 'their has always been misuse of the word religion..etc..'. Agreed. But now (2014), it's about time to re-adjust our correct perspective about religions, whatever religion is, AND overall banishing all the elements which are violent, ignorant, blatant aberrations or just misuse of them. So that people around the globe needs to know once for all that fictitious 'spiritual' concepts as 'Holy War', as an example, has little to do with their pacific way to Allah, or how you like to call your preferred divinity...etc.

At this point who will still use violence as a fake-masked 'spiritual' tool coverage, as jihad implies, will be considered outside any religion coverage, and in this case banished from the real Islam doctrine and precepts. AND all the people that in a way or another are still ignorant being brainwashed by various imam and preachers, will be then fully aware of their errors. This is just an example for Islamic followers. Though, they are not the only problem for a world that want to live in peace and a decent harmony among different beliefs, even if Islamic extremists ranks effectively higher of everybody else, today, in a ideal 'black list' of potential dangerous religions garnished with obsolete fanaticism...

And many times people made, and still makes a fatal evaluation error, considering a religion a doctrinal revealed truth, or at times God himself. No...Religions are only human 'ways' to God, not God himself!    Accordingly, these 'ways' to higher planes status can be many, not just one. So that there are also NOT privileged 'ways', neither chosen people or better religions. Worst than ever, no 'Holy Wars' are needed....etc...etc....

Sometimes I think it's a new dark age rising. So much ignorance and prejudice will lead humankind to destruction. In the pagan community, for example, we have lots of self-proclaimed authorities discussing what is right or wrong based on subjective experiences. It's not my intention to compare pagans with fundamentalists, there is a huge difference between both. But at the end humans in general are selfish and inclined to conflict and war. 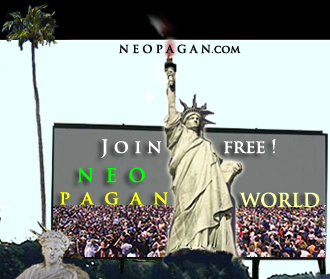 Silvio, do you think that humanity is of  lesser being when compared to the others who are not human, those which we share Earth with? Because of the self destruction of our human family which is so evident everywhere in the world I think it might be so.

Anyone not a Jew, Christian or Muslim, Person regarded as irreligious, uncivilized, ect.

This is the standard definition that is used to define us. WICCANS an PAGANS DO NO HARM, guess that's

the definition of irreligious.

As Wiccan I ALWAYS seek to DO NOT HARM. As Human Beings this should ALWAYS be FIRST before any else as we act. Wiccans know that harmlessness is the way to peace. But I must also say that Christianity, Judaism and Islam are of the GOD aspect and they are of that aspect ONLY. Devoid of the Goddess I must state that these religions are NOT of the creative SOURCE. I have read recently that Wiccans can be at one with these GOD religions. I disagree. The SOURCE is of BALANCE and  the living energy of the universe. So much that is of these 'GOD' religions is of hate and intolerance, and  it is more than mere 'sexism'. We as Wiccan know our SOURCE through the Earth that we live upon through the natural world. Blessed be is our Life as it is given to us though our SOURCE, the source that is of perfect balance of the masculine and feminine in the heart of creation. BLESSED BE to all Wiccan sisters as we understand this truth. And men can embrace men, and women can embrace women, for love is allowed, as it is also the will of our SOURCE..

To the founder..Blessed be. Summits seldom seem to resolve anything, and  as I have lived  upon earth for fifty-six years.. I KNOW I AM WICCAN. As we try as women in our Source to hold an keep peace in our way, as we do no harm. As Wiccans we KNOW we are family, the FAMILY Human, all of us  upon the Earth.. I seek to give Blessing as is allowed by our Source. We are always family. And it seems as family that we continue to hurt each other. I don't know why, but I have had times when I have cried. BLESSED BE.. FOR ALL ARE FAMILY IN OUR SOURCE. To you.. BLESSED BE

The religions of the world are now devoid of the Goddess, as they are of the God only.. Islam, Judaism and Christianity.. the main examples.  In the Source of All we know of god and goddess in complete equality and unity in faith and in wisdom. I would will also that the Source of All would be known for peace and harmlessness among all of humanity. Blessed Be.. as the Sun does rise and the Moon does set..in faith and harmlessness in continuance. In our Source.