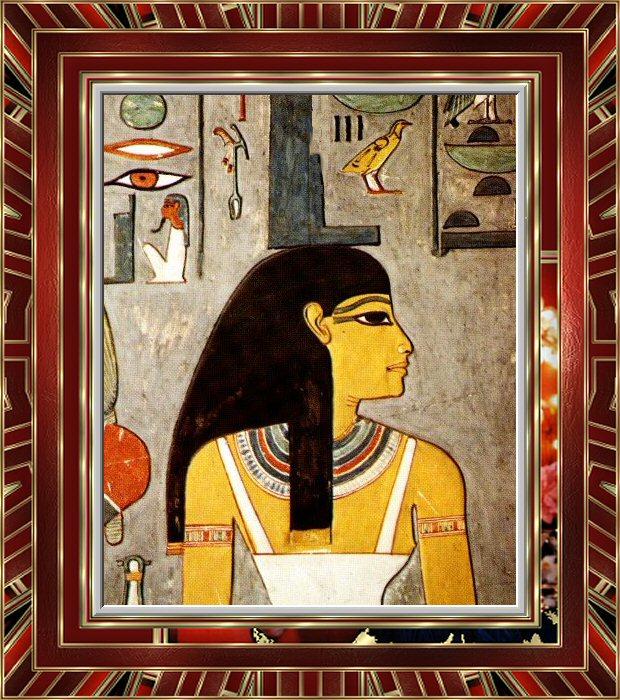 Isis...is recorded as saying: "I was the first to reveal to mortals the mysteries of wheat and corn." She is said to have discovered wheat and barley growing wild. Diodorus Siculus states that the reapers of corn in ancient Egypt were wont to invoke Isis at the cutting of the first sheaf...As a Nature-Goddess Isis has many aspects. Sometimes she is seen in such forms as the Virgin Earth or as Mother Earth, Isis being regarded as the Womb of the Earth, or earth as the Womb of Isis. This accords with Plutarch’s description of Isis as containing in herself as nurse (nutrix) all things to be born...It is stated that the soil is seen sometimes as the body of Isis. Plutarch writes: "They regard...the earth as the image of Isis." Similarly Maternus, writing about three centuries later states: "They say...that Isis is the Earth."

Sometimes Isis is seen as the bed of the River Nile, the river itself representing the parturient waters of the goddess. Sometimes she is regarded as the fertile goddess of the rich plains of Lower Egypt, in this form she is the life-giver, the mother, the nourisher and the healer of mankind. Isis is also seen as a goddess of water and in this aspect...According to Pausanias: "When the Nile begins to rise, the Egyptians have a tradition that it is the tears of Isis which made the river rise and irrigate the fields." In the early worship of Isis, this goddess appears to have been regarded chiefly in her aspect of a Nature-goddess. By the poets and the philosophers Isis was regarded as the archetype of Divinity immanent in Nature.


Her cosmic character is emphasized in her later worship and shown in the following account of Apuleius: "...At your voice the stars move, the seasons recur, the spirits of earth rejoice, the elements obey. At your nod the winds blow, clouds drop wholesome rain upon the earth, seeds quicken, buds swell. Birds that fly through the air, beasts that prowl on the mountain, serpents that lurk in the dust, all these tremble in single awe of you...I will keep your divine countenance always before my eyes and the secret knowledge of your divinity locked deep in my heart."

Permalink Reply by Ayanna Robinson on September 18, 2010 at 2:23pm
I love the history of the Mother Goddess. I think she is magnificent and I long for her embrace.