From the mountains of Turkey to the banks of the Nile, the most wide-spread religion of the ancient world in the Middle East was the worship of the male Moon-god. Sin is the name of the moon god, essentially Sumerian in origin which had been borrowed by the Semites.The Moon-god Sin was usually represented by the moon in its crescent phase. The Old Testament constantly rebuked the worship of the Moon-god (see: Deut. 4:19;17:3; II Kngs. 21:3,5; 23:5; Jer. 8:2; 19:13; Zeph. 1:5, etc.) When Israel fell into idolatry, it was usually the cult of the Moon-god. As a matter of fact, everywhere in the ancient world, the symbol of the crescent moon can be found on seal impressions, steles, pottery, amulets, clay tablets, cylinders, weights, earrings, necklaces, wall murals, etc. In Tell-el-Obeid, a copper calf was found with a crescent moon on its forehead. The sun-goddess was the wife of Sin and the stars were their daughters. Archeologists made some amazing discoveries in Arabia. Thousands of inscriptions from walls and rocks in Northern Arabia have also been collected. Reliefs and votive bowls used in worship of the "daughters of Allah" have also been discovered. The three daughters, al-Lat, al-Uzza and Manat are sometimes depicted together with Allah the Moon-god represented by a crescent moon above them. The archeological evidence demonstrates that the dominant religion of Arabia was the cult of the Moon-god. While the Arabs worshipped 360 gods at the Kabah in Mecca, the Moon-god was the chief deity. Mecca was in fact built as a shrine for the Moon-god. The evidence reveals that the temple of the Moon-god was active even in the Christian era. Evidence gathered from both North and South Arabia demonstrate that Moon-god worship was clearly active even in Muhammad's day and was still the dominant cult. According to numerous inscriptions, while the name of the Moon-god was Sin, his title was al- ilah, i.e. "the deity," meaning that he was the chief or high god among the gods. The god Il or Ilah was originally a phase of the Moon God. The Moon-god was called al- ilah, i.e. the god, which was shortened to Allah in pre-Islamic times. The pagan Arabs even used Allah in the names they gave to their children. For example, both Muhammad's father and uncle had Allah as part of their names .Muhammad in effect said "Look, you already believe that the Moon-god Allah is the greatest of all gods. All I want you to do is to accept that the idea that he is the only god. I am not taking away the Allah you already worship. I am only taking away his wife and his daughters and all the other gods." This is seen from the fact that the first point of the Muslim creed is not, "Allah is great" but "Allah is the greatest, i.e., he is the greatest among the gods. Al-Kindi, one of the early Christian apologists against Islam, pointed out that Islam and its god Allah did not come from the Bible but from the paganism of the Sabeans. They did not worship the God of the Bible but the Moon-god. The Muslim's claim that Allah is the God of the Bible and that Islam arose from the religion of the prophets and apostles is refuted by solid, overwhelming archeological evidence. Islam is nothing more than a revival of the ancient Moon-god cult. It has taken the symbols, the rites, the ceremonies, and even the name of its god from the ancient pagan religion of the Moon-god. The pagan Arabs worshipped the Moon-god Allah by praying toward Mecca several times a day; making a pilgrimage to Mecca; running around the temple of the Moon-god called the Kabah; kissing the black stone; killing an animal in sacrifice to the Moon-god; throwing stones at the devil; fasting for the month which begins and ends with the crescent moon; giving alms to the poor, etc. Is it any wonder then that the symbol of Islam is the crescent moon? That crescent moon with the star was an ancient symbol of the moon goddess Hecate of Byzantium as depicted in a coin of 300 BC.When the Ottomans conquered Costantinople they adopted the symbol.That crescent moon sits on top of their mosques and minarets. That a crescent moon is found on the flags of Islamic nations. That the Muslims fast during the month which begins and ends with the appearance of the crescent moon in the sky. 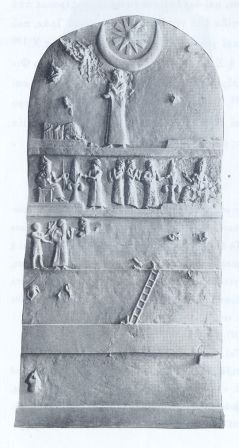 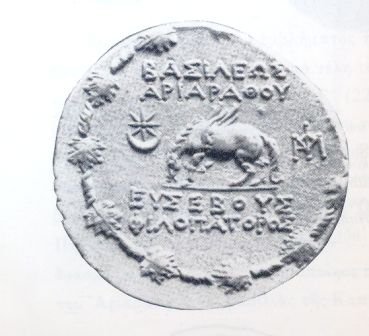 Top picture:Mesopotamian seal representing the priest of the moon god.2:Seal from Mesopotamia with the crescent moon and star symbol 2475 BC.3:Silver coin of the Cappadocian king Ariarathou Eusevous Philopatoros.Bottom picture:A Byzantine coin from the 1st century B.C.depicting goddess Artemis with her symbol of the crescent moon and the star,later to became the symbol of Islam.Information was taken from Yeshua Communications network. http://www.biblebelievers.org.au/

Comment by Rebecca (Community Moderator) on March 3, 2011 at 5:23pm
This is an excellent blog.. thanks for the information.

Comment by nurul azam on July 4, 2010 at 11:29am
this is very interesting.i cant belive what you have done.i belive and i know once arabian are full of pagan culture.
even todays kabah is the place where they worship the god and godess.but you find a very interesting link of that sign of moon in their flag.the ancient city of add,samud,luth are the greatest and develope city of pagan in that time in arab.thank you for your rich information,i inspeared and i will study again about that.
hope your help.